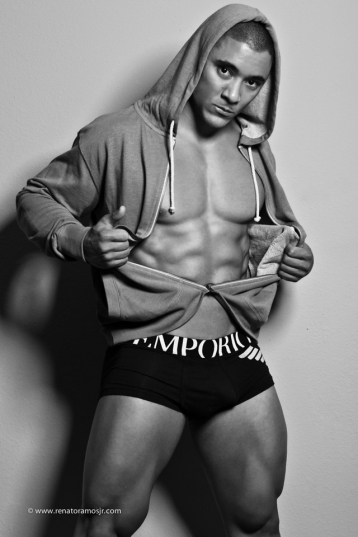 When it comes to photoshop, I’m usually more of a traditionalist and use only enough to enhance or “perfect” an image of it’s imperfections.  I like to keep the subjects looks as close to real as possible and unless specifically asked, I’ll never change their physical attributes.  But on the same token, I’m a big fan of images that have a surreal look to them.  Depending on what I’m shooting, i’ll often edit certain images to have those qualities.  However, I’m very adolescent when it comes to more in depth Photoshopping skills.  Like my actual photography, my photoshop knowledge is pretty much self taught with bits and pieces picked up from the more experienced.  Speaking of more experienced, I’m a  huge fan of Joel Grime’s work.  If you are not familiar with Joel, he’s an athletic photographer who does a lot of composite work.  Composite meaning, he’ll shoot various background images, then later combine them with another image of an athlete to create a composite photo that looks like the subject was shot onsite at the backgrounds location. The end result is some really fascinating stuff. <–check him out

I’ve been looking for an old school or gym locker room to photograph for a background, but have yet to find access to. So I had to resort to purchasing something form a stock photo site. The white is the original file and the final is what I eventually ended up with after combining several versions I played with.

I also had the pleasure to take one of his workshops and meet Mr. Grimes at a photography convention here in New Orleans last year and although he’s been shooting longer than most of the people I know personally, he’s still considers himself more of an artist than just a “photographer”.  And unlike most traditional photographers who knit pick and hold every photo accountable to every rule in the photography or photoshop book, he preached that reaching your goal and end product should be more important than following the rules. He doesn’t see the need to use lightmeters or adjusting to specific white balances. In fact, he’s colorblind and doesn’t see…green? or blue? i forget.   His work looks so calculated and surreal,  yet he does it all by eye like a good musician and do it by ear.  I came away with photography lesson’s as  – “The art can be right even if the photograph is wrong.”

2 of the images I’ve played with so far in creating the composites below. I probably should have shot these on a grey background or even better, a green screen. But the black side of my Lastolite was what was most convenient at the time.

I still have much to practice and learn, and doing these was definitely editing outside of my comfort zone.  I think they look pretty neat, but I’m not sure if it’s because it took me the time to play around and learn something I didn’t already know or if they actually do any justice to what I took in from Mr. Grimes tutorials and workshop. lol.

Renny will be competing next weekend at the Jr. USA Championships in Vegas in the Men’s Physique division. Top 2 finishers bring home a pro-card. Good luck!

For some reason, I like to get shots of my clients and subjects taking a photo back at me. Here he is being a good sport! Thought my fellow female photographer friends would approve.

This was Renny’s first time in front of the camera to this capacity.  Like almost everyone, he said  he was more nervous about this shoot than next weeks appearance on stage.  But he did awesome! and I believe in the end, we’ll have come away with a couple of my most favorite male model shots of mine so far.

Special thanks to my wife…whom for some reason decided to be around to assist for this shoot. hmmm

so give me your feed back below in the comments!  you like the 2 composite gym locker shots? should I try my hand at more?

Krista - These are fabulous, Reny! Great job! And not a bad model, either.

elizabeth fava - these are FANTASTIC; i love love love the composites. you did a fantastic job of “melding” them together! kudos!

courtney - This is amazing. I totally love it. Your work, it just gets better and better. Lovers it