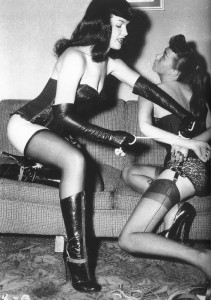 Classic Bettie Page – by Irving Klaw. i believe Bettie Page was ahead of her time. Some of the content I’ve found in her images shocks me to believe it was done back then. If you hadn’t researched her work, you’d wouldn’t know much of it centers around bondage. I’m not naive enough to think kink didn’t exist in those times, just pleasantly surprised it did!

I had recently blogged about some erotic art (Vanity and Artisitic Goals) I had been showing in a few locations and galleries, and at the time was a bit hesitant. Until recently I used to not mix my personal work with my mainstream stuff and for the most part I still don’t. I just don’t go out of my way to hide parts of my work, but rather let a viewer judge if they will on it all collectively as a whole. Some of it might scare away potential business, but in the end this isn’t my business. I shoot professionally because of the demand, but if everyone stopped requesting my mainstream work I’d happily continue expressing myself through photography.

So…This is a topic that’s been beaten like a dead horse, but it seems everyone’s still happy to debate it. Why? Because pretty much like politics, your views are your own personal opinions, and most people will argue till they are blue face that their opinion is right.  So… Art or Porn?  Where is the line to YOU at which a piece of art has gone too far and crossed the realm into something pornographic? If you show the same piece to 10 different people, you are sure to get some sort of split to either side.  Sometimes the results are surprising.  Some of my art pieces on occasion, have not been so well received and  been declared “pornographic”.  Does that offend or disappoint me? Not in the least and I totally accept everyone’s point of view.  It’s actually quite interesting to see the vast ends of the spectrum that people are on, but even more so the surprising reality of who is on each.

What makes ART?  I used to believe it was sooo cliche to label myself an artist or a photographer.  But the longer I’ve been shooting, i’ve come to comfortably acknowledge and accept the artist title. In fact, I’d prefer it.  Photographer? not as much.  But depending on who you ask, they are one in the same.  I personally believe Art is any image, sculpture, painting, exhibit etc that will compel it’s viewer to feel an emotion.  and It doesn’t necessarily have to be a positive emotion!  If a viewer bears witness to a piece and is utterly repulsed, then perhaps that artist’s goal was met.  The emotion he/she wanted to instill touched the viewer right where they wanted.    I would consider creating a piece that people find Blase normal and forgettable to be a complete failure.  I want a viewer to feel something…so an arousing burn in the gut or a disgusted queasy feeling in the stomach – either one I’ll take. With either one, it’ll be remembered. 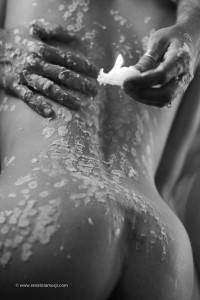 So I’ll end this post with one of my first bondage images. You could say this is what solidified me down this path of creating through photography. A lot of my art work centers around rope bondage.  The rope work you see depicted stems from an Americanized versions of Kinbaku (Japanese rope bondage).  The early Japanese soldiers had invented various ways of binding their prisoners to immobilize them after capture.  This “art” of binding found it’s way into sexual bondage during the Edo period (approx. 1600 to late 1800′s) and eventually crossed the ocean to the West. You’ll be hard pressed to find any bondage photography that won’t have some sort of Japanese bondage influence in it these days.

So, why Japanese bondage? I’m not totally sure myself. I’ll tell you it has nothing to do with suppressing some one or some sort of power trip.  It’s the beauty in the lines, the emotion in the subject, and the powerful feeling the visual can instill…and to me it’s just cool to look at.