…all on a Mardi Gras Day…  Well, it’s only Lundi Gras still, but that song has been stuck in my head for a couple days now.   Mardi Gras, Fat Tuesday…it’s here again.  As a kid, I would be so pumped to wake up at the crack of dawn, hop in the car packed and loaded with food, drink, chairs and family just to sit out by the street and wait for Mardi Gras day parades.  Then as a young adult, I’d have the same anticipation but with much more LIBATION and less food. But the last couple of years the weeks leading up to Mardi Gras day my enthusiasm has waned…UNTIL I start hearing the music.  The music brings back all those childhood memories.  You know the ones.  The kind that you feel deep inside reminding you exactly who and where you come from…for me, it’s New Orleans.

I was looking for a good version of the above song (All On Mardi Gras Day) but couldn’t find it on youtube….but here is another favorite.

So anyways…yeah, my last post upset a few people.  But I guess those were the ones who were insecure. ;-p  Just shoot…

I stepped out of my element a bit this weekend for some work for Northshore Fitness.  They are doing a piece on one of the local Beach Volleyball facilities – Coconut Beach.  Which is located outside the Slidell, LA Restaurant – The Dock.   Kelly and I talked about trying to incorporate more “action” photos when possible, so we thought this would be a perfect opportunity to have a go! 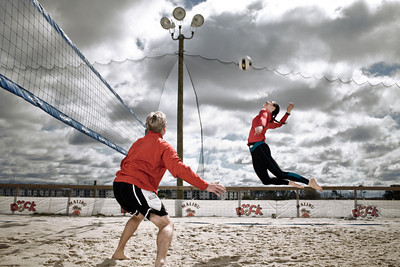 Unfortunately, the weather wasn’t cooperating fully… we had 20mph winds and quite chilly.  Sun would peak out every now and again, but the clouds were prominent.  The clouds were nice actually, gave the sky a dramatic feel.  Some of you probably saying this would be a nice HDR shot.  I tried it…haven’t attempted any HDR photos in probaby 5 years, I need to revisit how do them.  I used to say only “newbs” really did them, but a photographer I really admire has great success and results with HDR work. Check him out some time – Joel Grimes (photostream).   I attempted it on the above and the one below by manually changing exposures in LR then combining, but I still need to play.   Not to mention you can’t exactly capture 3 shots while the subject is in the air unless she can pause.    However because of  the sky alone and some LR adjustments, they kind of have an HDR feel to them.  I hope to experiment more soon.

Because of the wind, I wasn’t able to light this how I wanted.  I had brought a couple 64inch Parabolic umbrellas…yeah, umbrellas in 20mph gusting winds on Lake Pontchartrain.  lol.  Luckily I had the beauty dish in the Jeep as well.  So looks like I have to wait yet again to test out those Parabolics!  Maybe this weekend!